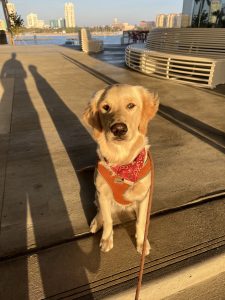 Shameless attempt to use my cute dog to get your business. Sammy on a morning walk at The Pier

I recently had a revelation – If I’m going to live my best life in Florida, I want to live in a house with a pool. Once I had that epiphany I did just that and by the time you’ve read this I’ll be living there. Actually I’m updating my blog post right now and I’ve been living in my new home for about 6 months now! Although my pool is about the size of a large bathtub it still counts! The pool deck has room for a jacuzzi and a nice backyard and covered patio with space to entertain.  I wanted a reason to have friends over instead of always meeting at bars/restaurants downtown. There is something special about having guests over to share your home with.

As I was doing my research I noticed that there are certain types of neighborhoods that have a higher concentration of pool homes. I used to really want to live near Downtown but unfortunately many of these homes in historical neighborhoods typically have smaller yards which aren’t suitable for a pool. Since I’m a single guy and not printing money like the Federal Reserve, I opted to buy in a more up and coming neighborhood where my $395,000 went a bit further.

My goal for this article is to outline the best neighborhoods to consider if you have pool home aspirations like myself. I’ll also outline things to take into consideration such as location, flood zones, type of construction and yard size.

This is where I’m moving to! Known as “The Friendly Island” Coquina Key is it’s own island that was originally much smaller until it was dredged to make more land available for residential homes. This is probably why about 90% of this island is in a flood zone.  There’s not much here besides a beautiful waterfront condo community called Waterside at Coquina Key, residential houses of course and a 7-11.

Good news is there is an area right outside the two exits on the island with rapidly developing commercial space. Currently as you come out of the north exit, there is an area with the locally famous diner Munches as well as a tiny walk in coffeeshop called Southside Coffee. Across the street is a large converted 1920’s home that was formerly a pizza restaurant but is now a fish market / restaurant called Mullet’s. Their motto is “Business in the front party in the back.” since they have a backyard with some awesome space for outside activities including live music.

Outside of the south exit is a dilapidated strip mall on a massive piece of land  that was just recently bought up this year (2021) and is about to be converted into apartments with ground floor retail. These apartments will be considered “Work Force Housing” which according to this article St. Pete Rising wrote “housing is defined as housing affordable to households earning between 60 and 120 percent of area median income (AMI)”.

Coquina Key is going to be one of the most affordable neighborhoods to find a pool home. The house I’m closing on is going for just under 400k however if that same house was about a mile north in Old Southeast it would easily be closer to 550k-600k. Some people may describe Coquina Key as up and coming since there are still some run down homes in the area but the vast majority of the island is pretty nice in my opinion. 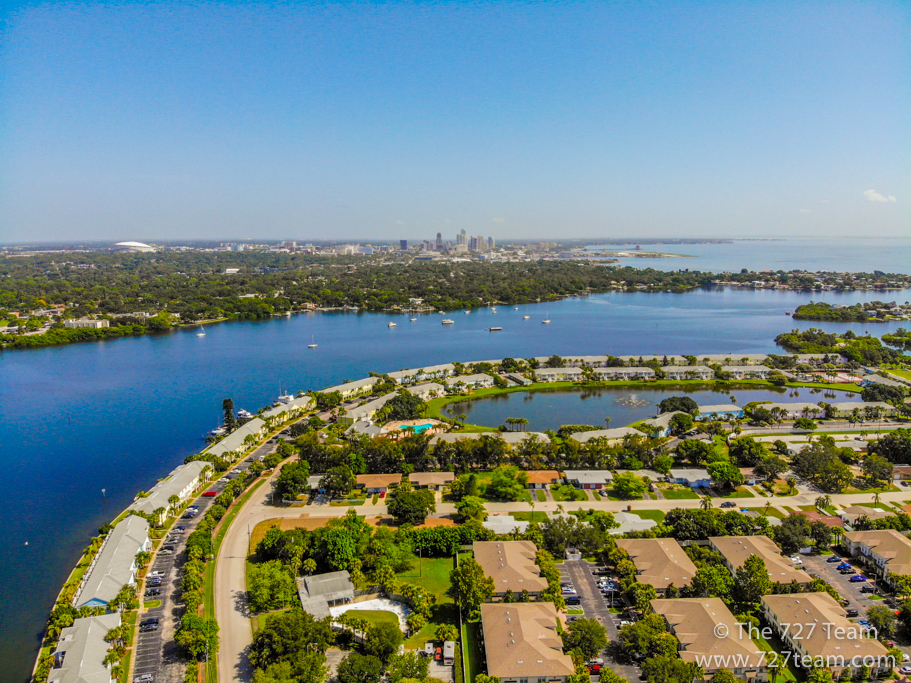 Waterside North with Downtown St. Pete in the background

This was originally my number one choice because it’s the best neighborhood to find a pool home that’s walking/biking distance to Downtown St. Pete, sort of the best of both worlds in my opinion.

The only downside to living in Old Southeast is that a good portion of this neighborhood is in a flood zone. If you finance a home you will be required to carry flood insurance. Unlike neighborhoods like Shore Acres, I haven’t heard of major flood issues even though it is a designated FEMA flood zone. The worst of it will probably just be paying the flood insurance premiums.

If you buy your home with cash then of course you don’t need to get a flood policy although you may want to protect your investment considering that regular homeowners insurance does not cover flood related damage.

Old Southeast is not only close to Downtown but also a beautiful neighborhood. You’ll find mature trees with lots of shade, brick lined streets and also Lassing Park which is a 14 acre waterfront park overlooking Tampa Bay. I have a full blog post dedicated to this neighborhood here which also has an awesome video that was made by The City of St. Pete. 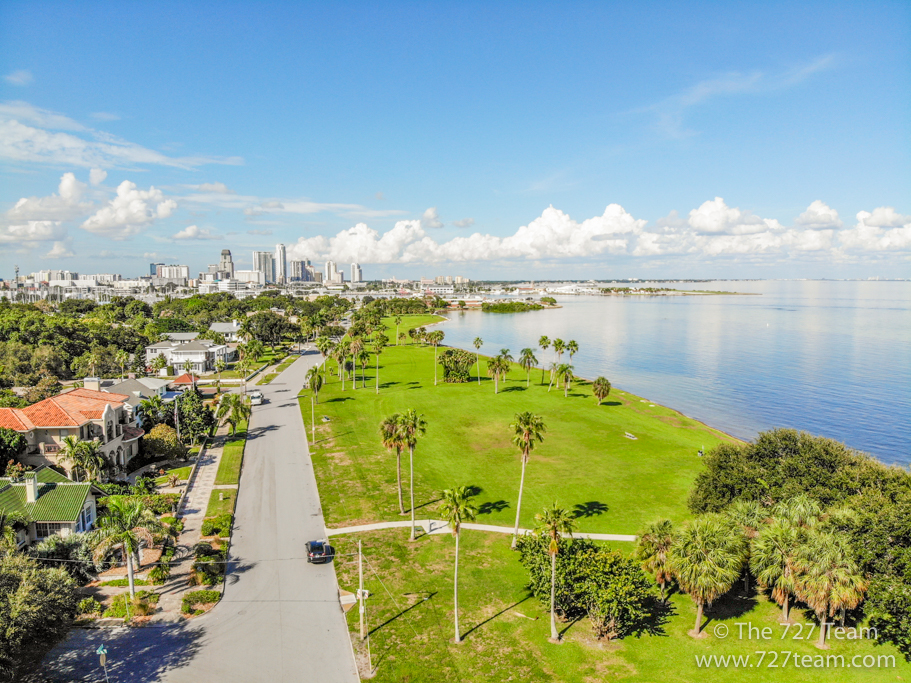 This is where I currently live! I’ve been here almost 5 years living in a townhouse with a community pool. Apparently it’s frowned upon to skinny dip in public though so I’m ready for my own pool, then only God can judge me instead of my elderly neighbors.

This area has a good amount of block construction homes with decent sized yards. The Pink Streets are about 50% flood zone however most of Pinellas Point is not.

With the exception of the Pink Streets, parts of Pinellas Point are still relatively up and coming. This is another area to look for a pool home if you’re considering something more affordable. 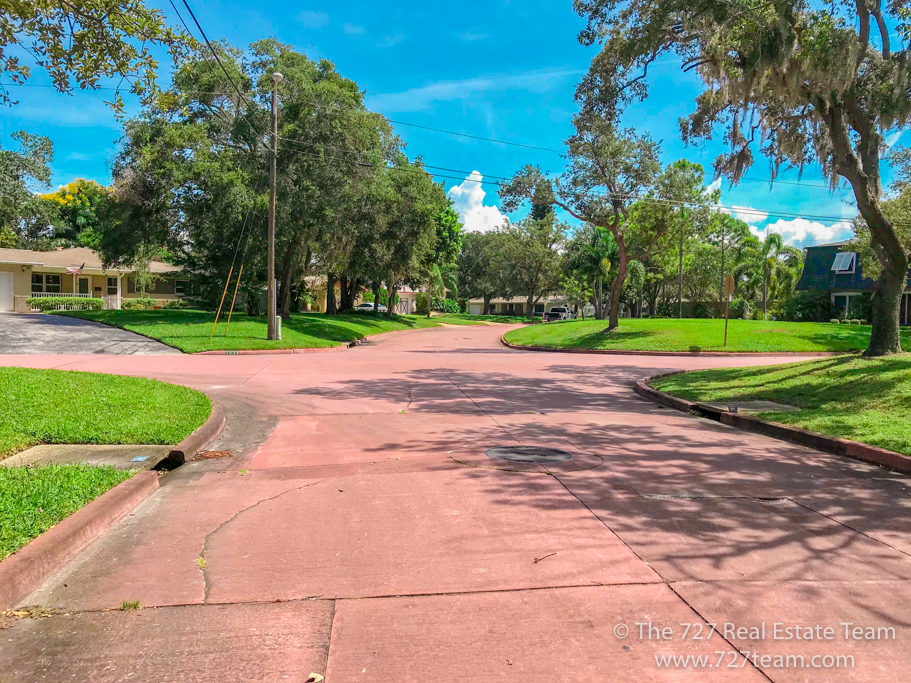 The Pink Streets were originally supposed to be the premiere neighborhood in St. Pete before Snell Isle was dredged and constructed. This area is going to be one of the most established neighborhoods in South St. Pete. Here’s an article about Pinellas Point wrote by yours truly, no skinny dipping pics but I’m thinking about starting an OnlyFans so let me know 😉.

This neighborhood in South St. Pete is built around a golf course and is known for its oversized yards. Some of these yards are absolutely massive compared to other areas of the city. If you’re looking to find a pool home and also want to have some space between you and your neighbors, this might be a good option.

South St. Pete is mostly local neighborhood traffic. This area is quiet and still a bit up and coming. It’s also not in a flood zone so this is probably your best bet for finding a more affordable pool home while keeping your monthly expenses down. I also don’t have an article for this neighborhood in particular yet but here’s an article outlining the best neighborhoods in South St. Pete if you’d like to know more. 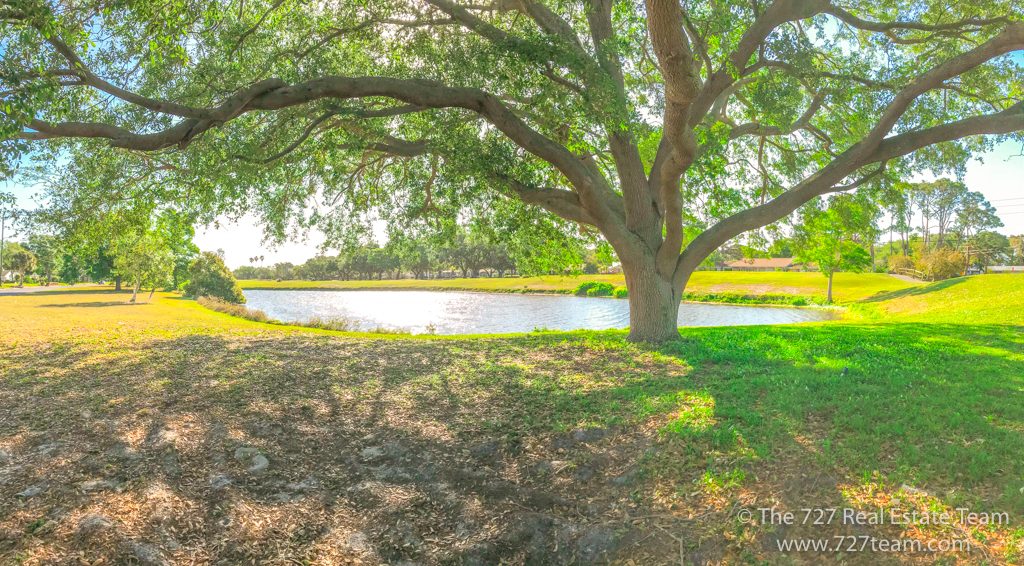 Bahama Shores gets an honorable mention! Even though this neighborhood only consists of about 300 homes that seem to rarely go up for sale, this is one of the nicest areas of South St. Pete. Well manicured lawns, beautiful mediterranean style homes, lots of shade including some enormous Banyan trees, this area has that peaceful, old Florida type of feel. Similar to other parts of South St. Pete, you’ll find some larger yards here with either a pool or room for one. 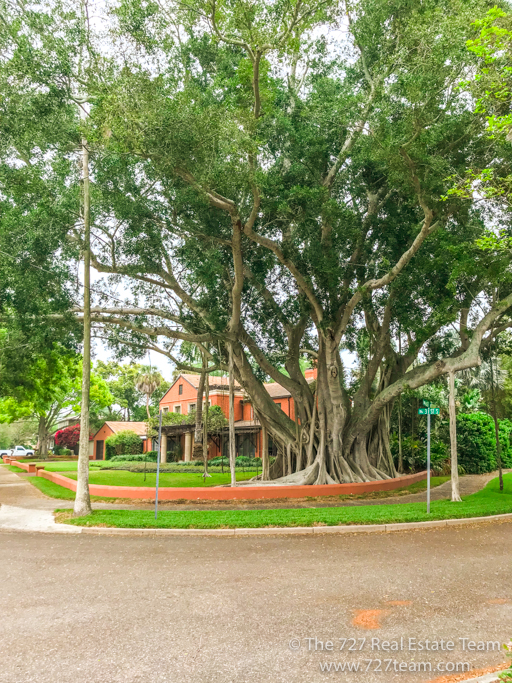 This would actually be my last choice to live but let’s throw it in here anyway. Shore Acres has a ton of pool homes but it’s also known to flood – in some cases even at high tide without any rain. If you decide you buy a home in Shore Acres you will most definitely want to do your due diligence and find out if the home has flooded before. It seems to be different street by street – some homes are untouched by flood waters but others have flooded multiple times. 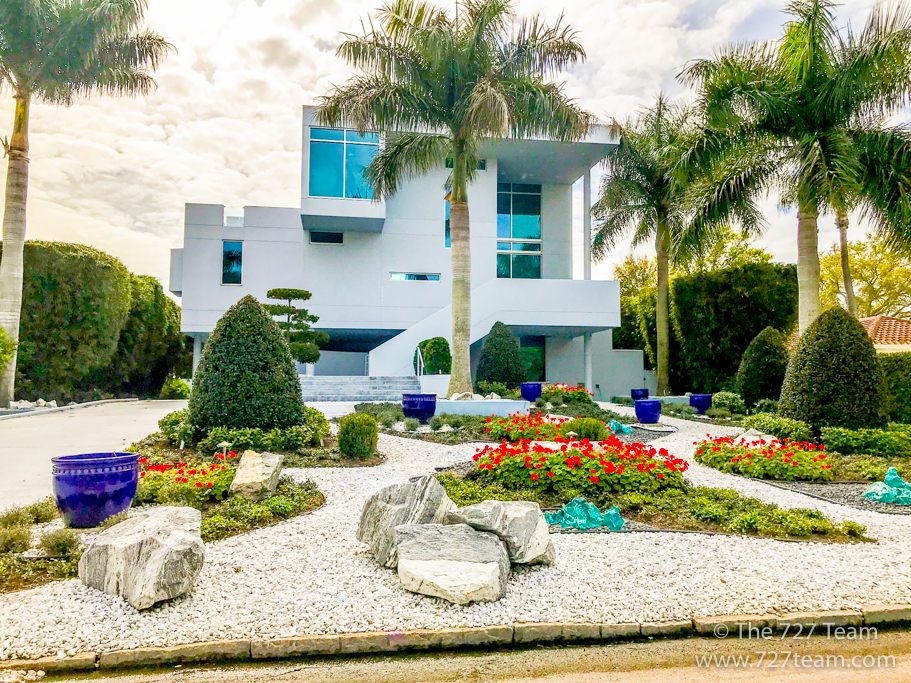 During heavy rains these streets can turn into rivers. You would be smart to own a truck or SUV if you lived here. Either that or a Tesla since their batteries are sealed and can handle water better than a combustion engine that requires an air intake, which can pull in water if it gets too deep.

I’ve personally driven through flood waters once and it was pretty scary in a low sitting car. The water went over my hood. I didn’t know this at the time but apparently if you don’t let off the gas then your engine will not take in water and stall out. Luckily I didn’t let off the gas, powered through and made it to dry land without any damage. There was a gentleman that went to my old gym who drove through flood waters in his Mclaren, flooded the engine and had to deal with a $50,000 replacement. Not sure if it was covered by insurance but I hope so.

Despite the flooding, Shore Acres is one of the most beautiful neighborhoods in St. Pete. It’s very suburban and known for its great elementary school. Here’s an awesome article my former business parter Ryan wrote about the area. If you get a house here I may get you a kayak as a closing gift. 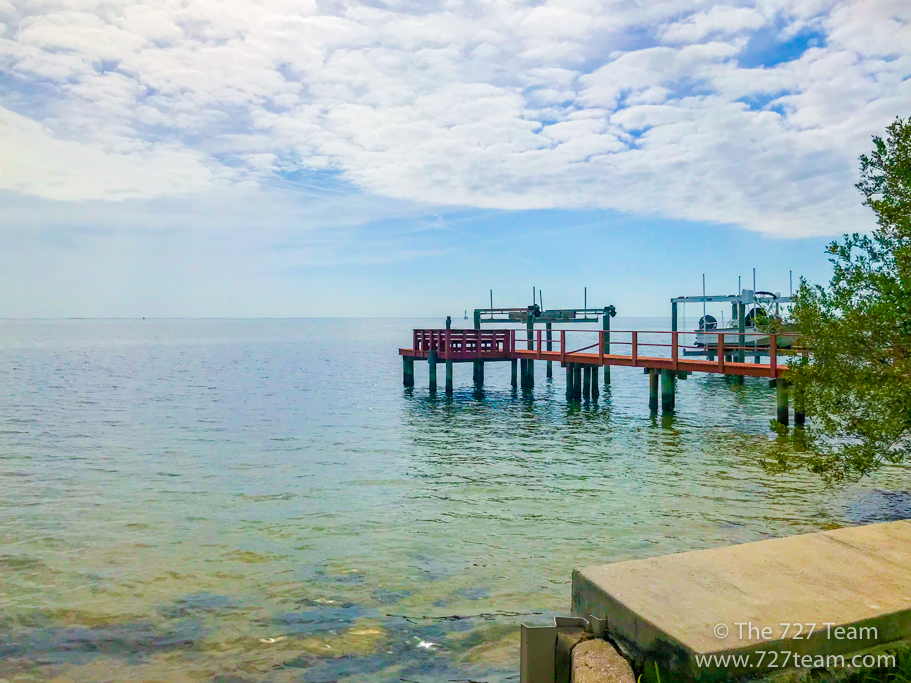 Snell Isle is the most luxurious neighborhood in all of St. Pete. This area is also 100% a flood zone but not as notorious for flooding as Shore Acres is.

This neighborhood is known for its extravagant homes and it’s premiere golf course. This is the most expensive residential neighborhood in St. Pete and is filled with newer construction homes which many times have been built above the 100 year flood plain so your potential for flooding is dramatically reduced and your flood insurance will be minimal as well.  New construction homes within a mile of the coast are required to have hurricane impact proof windows as well so you would feel safe here.

I just realized that I’ve never written an article on Snell Isle so I’ll put it on my to do list to buy a tuxedo to get in the right state of mind to put one together. I did write a little bit more about it in this article Top 5 Nicest Neighborhoods In St. Pete.

Hell yes who doesn’t want to live near the beach. The entirety of the barrier islands that make up our 20+ miles of coast line are all in flood zones but I think this is the best place to live if you’re going to justify paying for flood insurance. How cool would it be to take your golf cart to the beach and then have your friends come over for a pool party after? Also if you buy a house right on the beach with a pool you can have me over and teach me how to be a big baller.

There are quite a few neighborhoods spread out along the beaches and different type of living arrangement from beachfront to waterfront to suburban style neighborhoods. I’d say the majority of waterfront homes I’ve seen in this area do have pools so you can go live the boat life and then bring some friends back to relax by the pool

If you are uneasy about flood zones but find a home you love, I’m happy to go talk to some neighbors to assess the situation and see if flooding is a real threat or if it’s simply an area that is at the flood zone elevation and doesn’t experience flooding on a regular basis.

With all the crazy stuff going on in the world, I think there is no better time to do what your heart desires to live your best life. I’m pretty optimistic about the future however times like this I think of The Jim Morrison lyric “The future’s uncertain and the end is always near”. Let’s find you a home in St. Pete so you can wake up in the morning and get yourself a beer – and drink it next to your pool.