Top 8 Reasons To Move To The Coquina Key Neighborhood in St. Pete, Florida 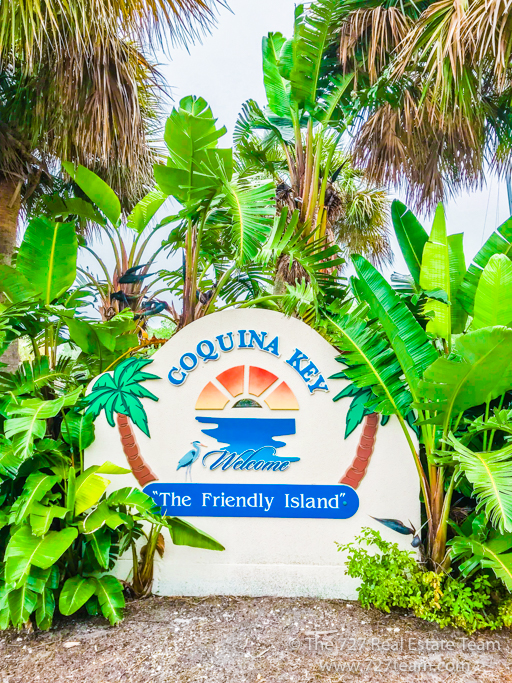 I feel extremely qualified to write this article since I recently bought my first single family home in the neighborhood of Coquina Key. This neighborhood dubbed “The Friendly Island” is a peaceful part of South St. Pete with a minimal amount of through traffic considering it’s technically an island.

Telling everyone I live on an island in Florida sounds pretty great. Sounds upscale and I like to make people think that I’m fancier than I am. You may find me at the island 24 hour 7/11 buying 2 for $4 tallboy beers and scratchy lotto tickets.

You may also catch me outside at South Side Coffee where I’ll be sipping on my Mexican Mocha and shooting their patented “hangover shot” after a hard night out.

You may find me keepin it real at Waterside South where I call the gate guard and pretend I’m my friend who lives there to sign myself in, then jump the fence to get into the beautiful waterfront pool and hot tub area. More than likely you’ll find me chillin at my house with my cats and my dog though.

Before you enjoy this article feel free to check out this video I made of the neighborhood. Also if you have any questions for me while you’re reading this feel free to call or text me here at 727-307-1111 or shoot me an email at chrisformico@gmail.com! 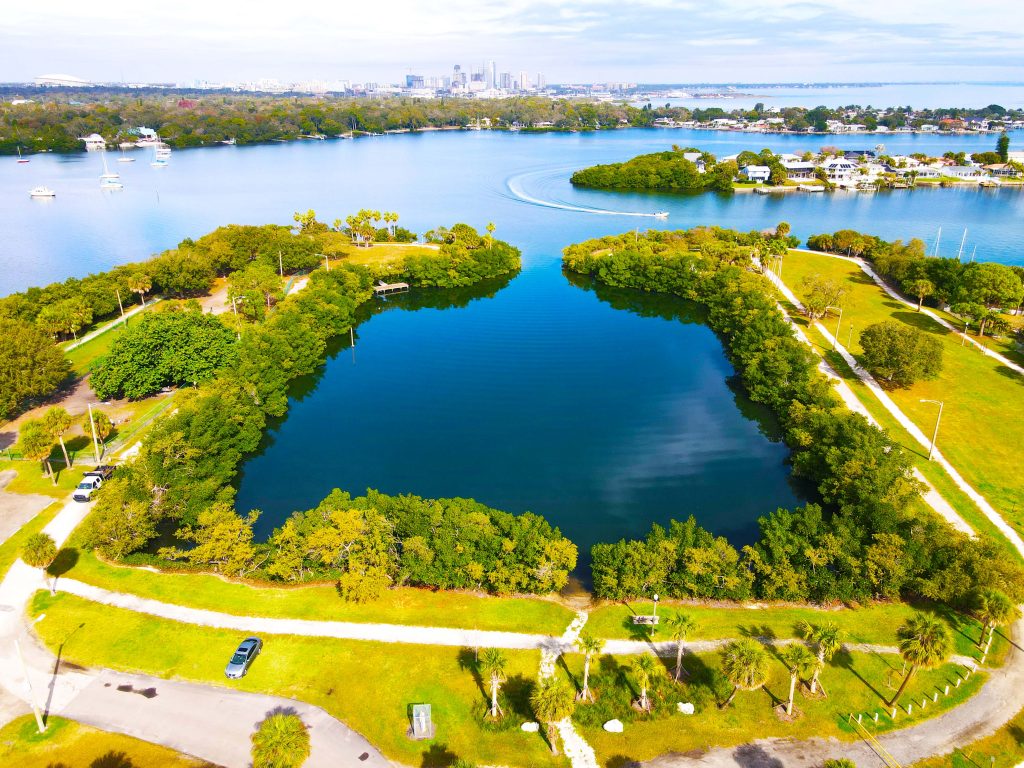 Coquina Key Park with the DTSP Skyline in the background

When I was starting my house search I wanted to be really close to Downtown. I had this idea in my mind that I would love to be in an area where I could just walk there. The problem was that most of the neighborhoods directly surrounding Downtown are historic homes which typically have much less square footage and require a bit more TLC compared to a home a bit further away in the same price range.

I can’t walk to Downtown but a bike ride is easy. Also it’s less than a 10 minute drive in a car. I don’t know how long it takes in a golf cart but one day I’d like to find out.  I recently got a Tesla which is pretty much a fancy golf cart that gets me Downtown pretty quick.

As you can see on the map above Coquina Key is mostly an island. The two main roads actually intersect in front of my house and neither ever gets super busy.
This is what I like about all of South St. Pete. It is probably 99% local traffic because there’s really not much of a reason to come to this area if you don’t live here. This is especially true on Coquina Key where the busiest road is about 30mph with speed bumps. I’d imagine this would be ideal for people with kids or people like me with pets that go outside.

The other benefit to this is my local commute is always pretty predictable. Traffic doesn’t really exist on the South Side. I thought I was a patient person without road rage but turns out I just live in a place where I never have to deal with it.

6. Up and coming / affordable 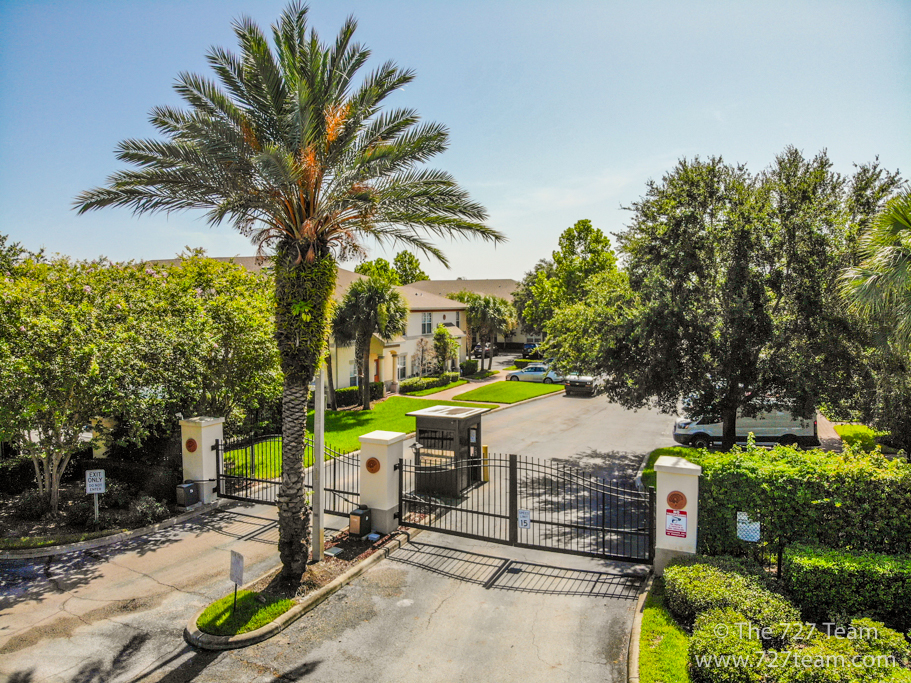 I’ve talked to a few people in my neighborhood that share the same sentiment – Coquina Key is a bit of a hidden gem. We’re close to Downtown, not far from the highway and a balance between affordability and safety compared to the other areas near Downtown St. Pete.

There are most definitely still plenty of homes that aren’t super well maintained but I’d imagine as these land values continue to go up, homes will continue to be improved.

The vast majority of homes on Coquina Key are smaller – close to 1000 square feet however the lots in this area are still pretty sizeable. Since the land value in the area is going up dramatically I think it’s only a matter of time before many of these homes get torn down and new construction is put up instead. I’ve already seen a few examples of this in the area, especially with waterfront homes. 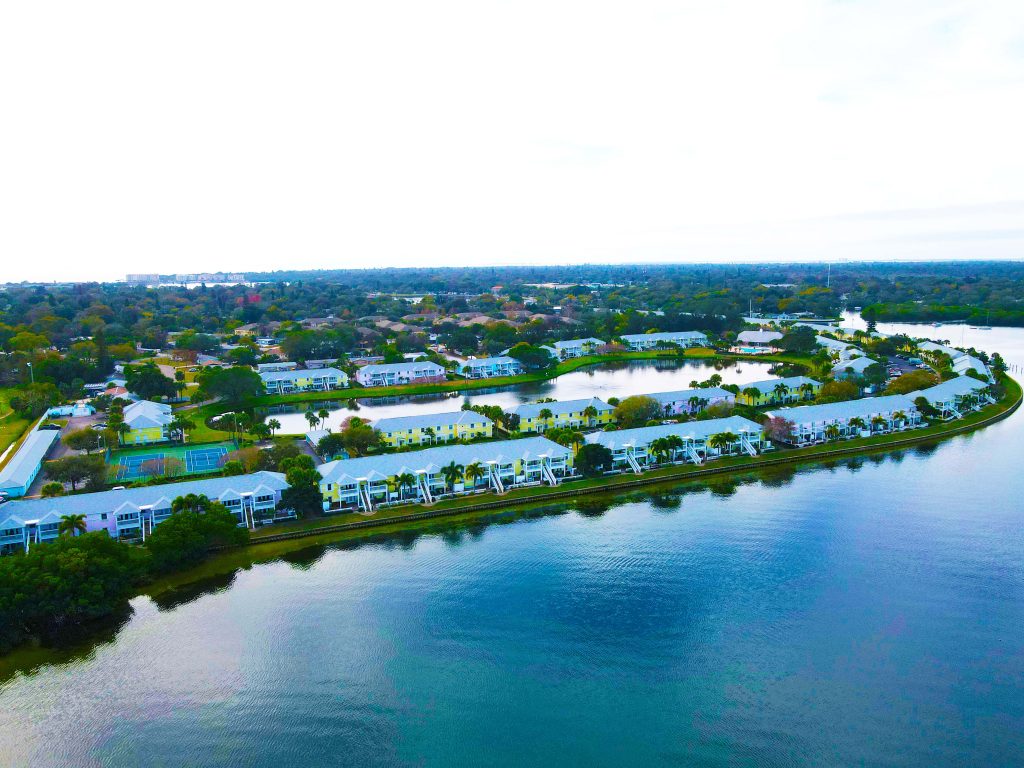 Waterside North. 1 of 2 communities on the island by the name of Waterside at Coquina Key.

What’s nice is even if you live at Waterside North you still get all the access to Waterside South. Waterside South has amenities such as a waterfront pool / hot tub next to the clubhouse that overlooks Tampa Bay. There’s deeded boat slips which can be bought or rented to other Waterside owners. They also have a volleyball court, shuffleboard, tennis courts, kayak racks, a pool table and a community bar – all of which could keep you busy for days on end without leaving the community. 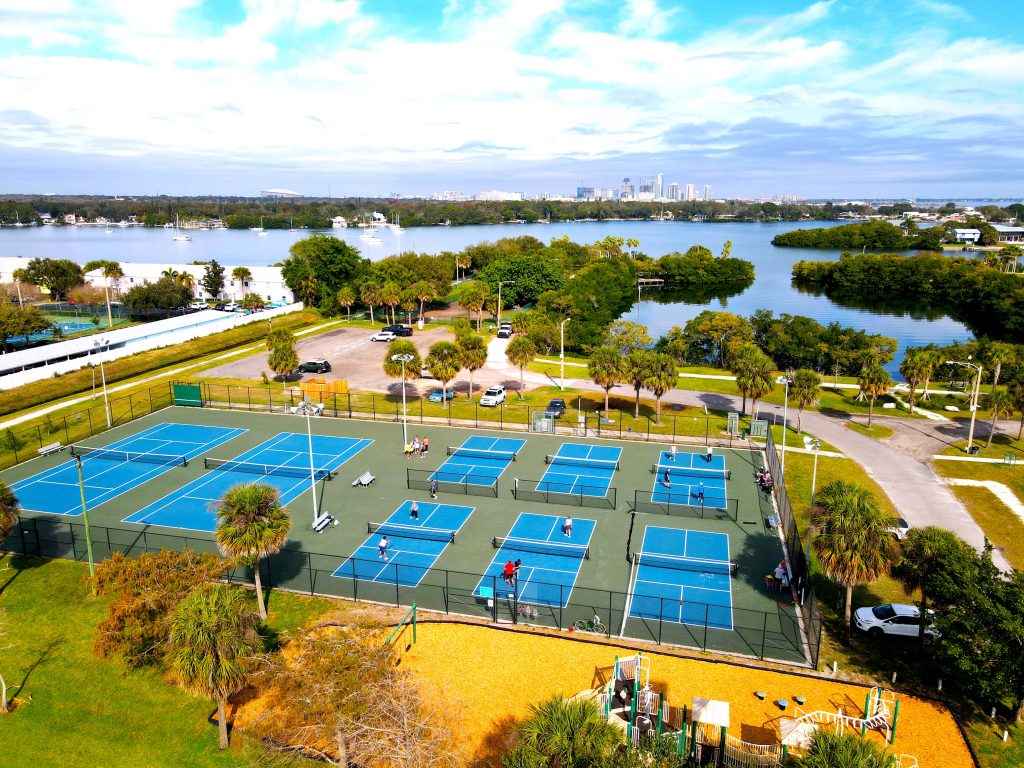 Coquina Key Park is nothing super fancy but it is always nice to have some park space. This park has a soccer field, dog park, tennis courts as well as a trail around the perimeter where you can walk along the waterfront and mangroves. You can launch a kayak here and paddle around the island! 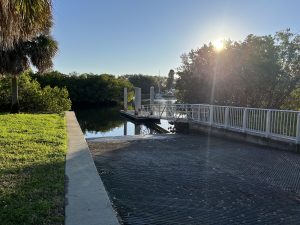 This launch is couple blocks outside the North entrance to the island in a place called Grandview park. There’s a huge parking lot with parking for trucks and trailers and it’s never busy. If you go to another marina like Maximo for example, it is almost always filled up. This little boat launch is a hidden gem, however you’ll have to travel a bit further by boat to get to sandbars and the beach. Bunces Pass is always a great place to spend the day and across from it is Shell Key where you can get a permit to camp and have a bonfire on the beach.

If you want to keep your boating adventure within Tampa Bay, another option is to head north to hang out at the Wheedon Island Sandbar. You can also cross the bay to the Tampa side and check out Beer Can Island.

One thing I’ve always thought was really cool about St. Pete is the properties zoned both commercial and residential that are turned into restaurants. I love the idea of feeling like you’re at a historic home in a public place. When I lived in Germany I learned that many villages have something similar – a public house where the neighbors can gather. Fun fact – the word pub is originally a shortened version of public house.

There’s a few of these around St. Pete that are notable and the one in the Coquina Key neighborhood is a relatively new addition. It started out as an awesome pizza place but has since been turned into Mullet’s Fish Market – a restaurant whose motto is “Business in the front, Party in the back”. This is quite literal since they sell fresh fish inside the front area and also have a beautiful back yard, deck and patio where you can enjoy some good food, drinks and often live music.

Besides Mullets we have a local legend across the street – Munch’s. This little old school greasy spoon diner has been around since 1952 which is a rare thing in a city where you constantly see businesses come and go. They were even featured on that show with that guy with the haircut, Diners, Drive-Ins and Dives in 2011.

Next to Mullets is Southside Coffee, a tiny little walk in coffeeshop with an equally tiny front patio. This is the type of place where you go sit down and it’s almost impossible not to strike up a conversation with someone else sitting there since it’s such a tiny, cozy area. 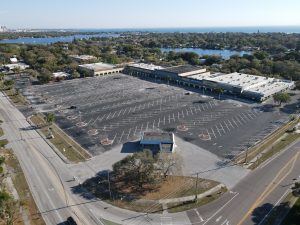 This complex has been underutilized and a bit run down for the longest time. The anchor tenant was Save-A-Lot which I believe has the Guinness World Record for most depressing place to shop for groceries. Besides that there was a CVS, Chinese takeout, liquor store and a bar that I really liked at first since it had some beautiful volleyball courts in the back, but it unfortunately ended up attracting some notoriety after some people were shot in the parking lot. For what it’s worth I never got shot.

Luckily a developer took notice and bought this huge parcel of land with the intention of redeveloping it. They plan on building a mid-rise building with workforce housing and retail stores below. This will be a huge benefit to this neighborhood since there really isn’t anywhere to shop unless you drive Downtown or towards The Skyway Marina District which are both about a 10 minute drive away.

I’ve been emailing the developer trying to get updates and this is what they have told me for now.

“We don’t have that planned out just yet. We plan to market the space in the coming months. We have good ideas from the community and are using that input to help us craft the plan, as well as market forces.

Also, we aren’t going to have “ground floor” retail. We plan to have the retail in a different building from the residential buildings. We think we can accomplish this and create more of a welcoming retail environment for both the community and our residents. Once we have a better idea, we will be issuing a full press release.” 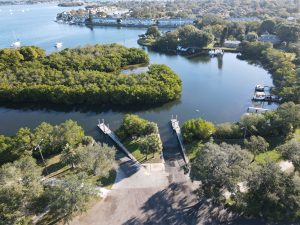 Southside St. Pete including Coquina Key is many times overlooked but that stigma is starting to disappear. As someone who’s lived in this part of the Southside for about 7 years now, I can say I’ve had many good experiences and essentially no bad ones. I did get a bike stolen from my back patio once but that bike was a piece of crap anyway so they did me a favor. You’ll hear about the occasional car break in and hoodlums trying your door handles at night in some areas but that can happen anywhere. I definitely hear about these same things happening in nicer neighborhoods which makes sense because they probably have nicer stuff to steal.

Coquina Key has a great balance between quiet living and also close to the excitement of Downtown. It’s coming up rapidly, especially considering that the massive plot of land that was formerly Coquina Key Plaza will be redeveloped into something useful and modern. Thanks for reading if you made it this far and feel free to reach out to me if you have any questions about the area!