Top 8 Reasons To Move To The Grand Central District 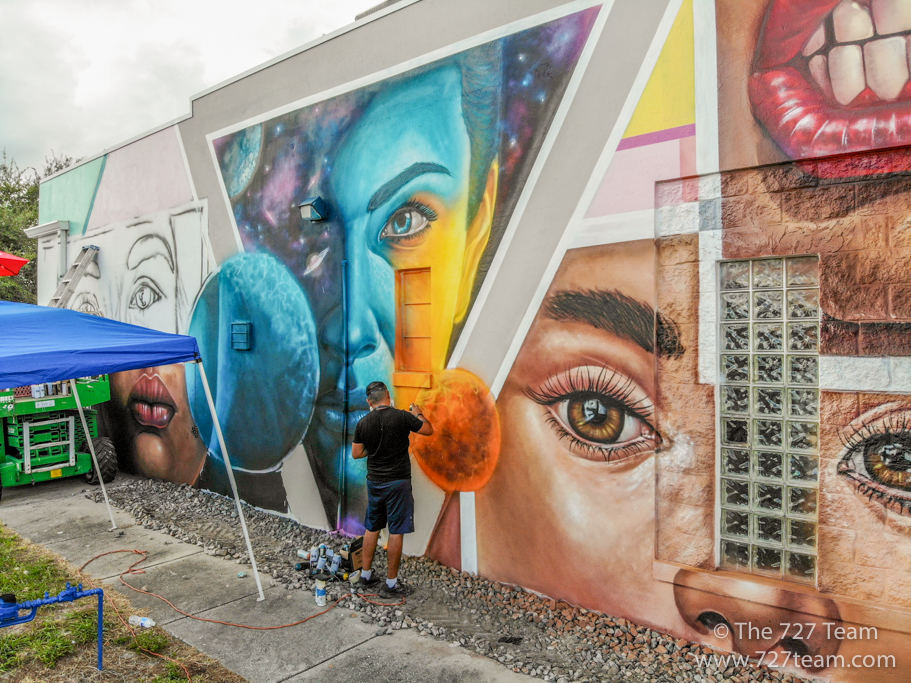 The Grand Central District in St. Pete has started to get noticed more in the past few years. Usually Downtown St. Pete gets most of the attention but now some of the focus is shifting towards this area which is only a mile west when you are traveling down Central Avenue. This area has sort of a small town mainstreet feel where you can easily park your car on the street and explore on foot. A couple years ago, a journalist from The Boston Globe wrote an article on this area and since then we’ve had more and more people from out of town ask us about it.

One of the most popular requests we hear during a home search is the walkability factor. Naturally if you can afford it you may gravitate towards a condo Downtown however if you’re looking for a single family home that’s a bit more affordable and spacious, the neighborhoods surrounding The Grand Central District may be a better option. This area is developing rapidly – both on the residential and commercial front.

OK now that you know the basics, let’s get into The Top 8 Reasons To Move To The Grand Central District! 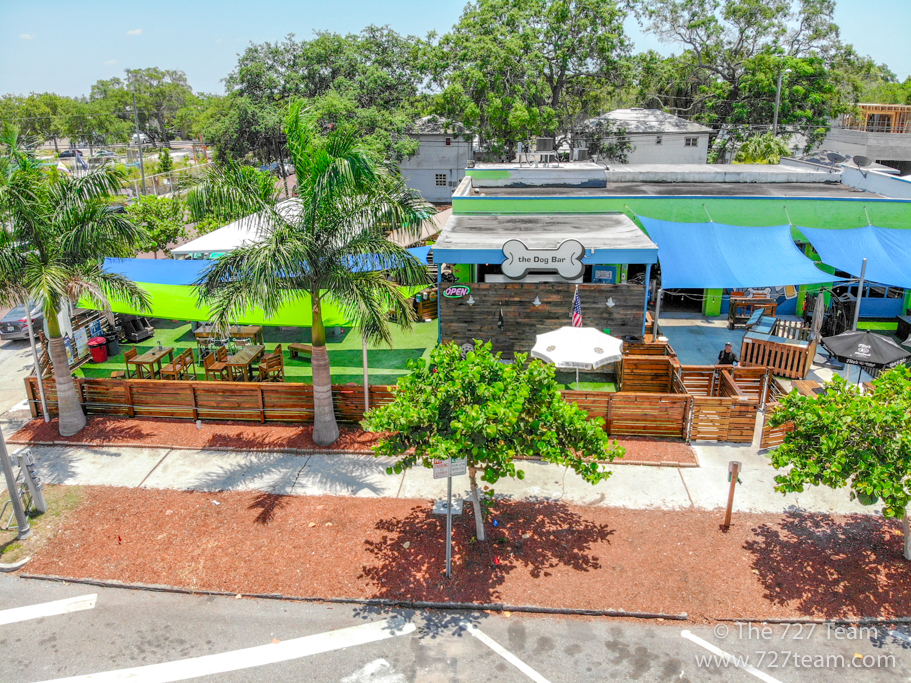 Similar to the portion of Central Avenue that runs through Downtown St. Pete, The Grand Central District is lined with an array of unique businesses that add their flavor to this area. You’ll see the borders of this area on the map above – Grand Central and the EDGE district mix together starting at 16th Street and extend to the 31st street corridor which provides about 1.5 miles of walkable area along Central.

South of The Grand Central District is considered The Warehouse Arts District which is home to a few breweries and art galleries that make this area even more walkable. Since this area is a bit more spread out it may be smart to jump on a bicycle instead of walking. The Pinellas Trail runs right through this section and is a great place to explore on your bike. 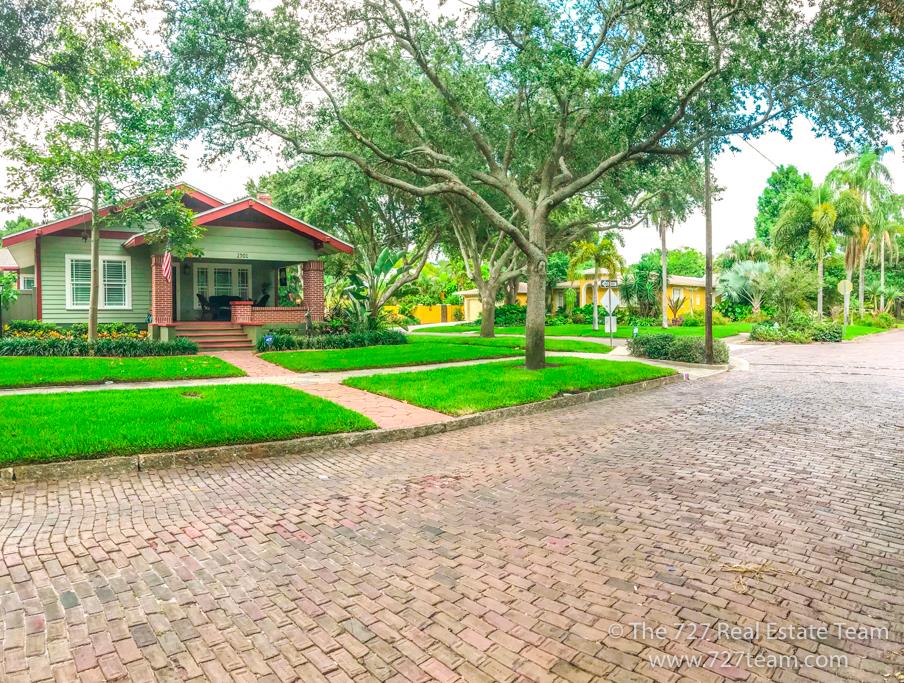 Historic Kenwood is the most popular neighborhood in this area. Kenwood is a pleasant neighborhood with many 1920’s Craftsman bungalows and other types of homes. While Kenwood is not the most affordable neighborhood, there are still some homes in disrepair that will benefit from the areas increasing value.

Even the dilapidated homes in Historic Kenwood are a hot commodity so it’s smart to consider the surrounding areas that may have more potential for appreciation. Kenwood has become such a hot neighborhood that both the neighborhoods north and south of this area have benefited from it’s popularity. North Kenwood doesn’t have quite the same charm, however it does have a great location which is why you’ll notice older smaller homes being razed and new construction taking their place.

South Kenwood which is also known as Palmetto Park is seeing an even more aggressive upswing in property values. This is most likely attributed to it’s walkable proximity to The Grand Central District. There are also no historic regulations in this area so new construction developers are making the most of it. Developers are aggressively building in this area with many new construction modern homes selling for 500k and above. Soon this area will be unrecognizable in a good way!

There has been a huge influx of craft breweries in Tampa Bay within the past decade. Due to the availability of large commercial spaces in the Grand Central District, this area has become a mini mecca of craft beer. Within 4 blocks you’ll find some of the best breweries in the area including 3 Daughters, Cage Brewing and Pinellas Ale Works. There’s at least one new one I haven’t visited yet and one other brewery being built within the same area.

As this area continues to develop there is definitely more empty commercial space for fun redevelopment projects such as these. Are you considering repurposing a commercial space? Let us know and we can put you in touch with our local RE/MAX commercial agent. 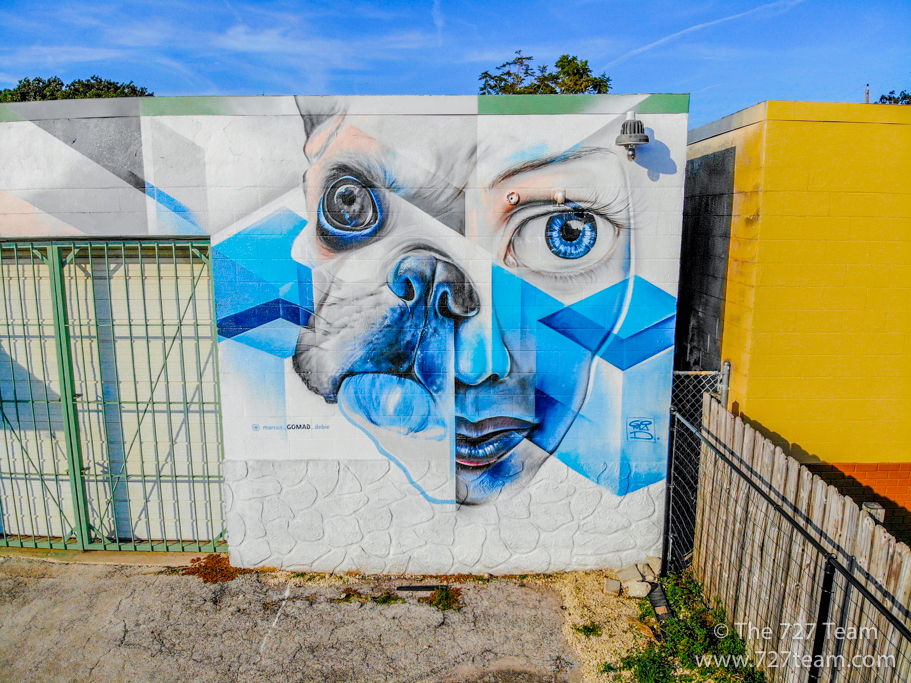 One of my favorite regular events is the Second Saturday Artwalk which takes place on the Second Saturday of every month, mostly in this area. During this event, artists open up their doors to the public and you can meet the artist and sometimes witness the art being created. On top of that, there’s an amazing amount of murals in the area and every year more are added during the SHINE mural festival. Besides the Art Walk, the best way to get started with the artistic culture in this area is to jump on your bike and see how many murals you can find. During the summer months you can combine your bike ride and the Artwalk, or you can jump on the free trolley that connects the different art studios and districts. 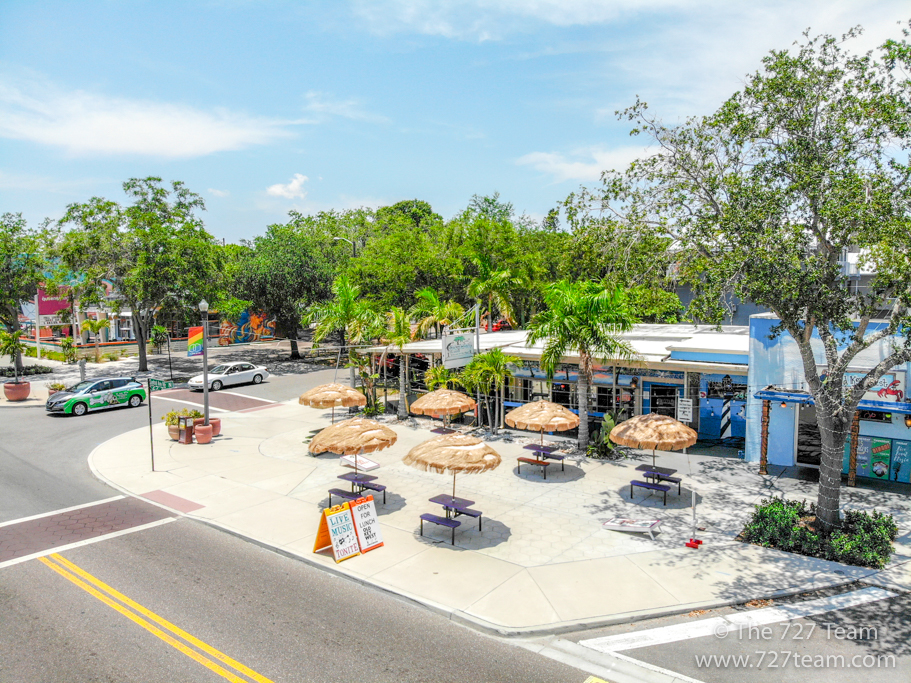 There are a number of solid restaurants in The Grand Central District and more opening up every year.  It’s not nearly as densely populated as Downtown however there are a few places that stand out. A mix of sit down restaurants, breweries that serve food and fast casual joints make up this area.

Casita Taquiera is a great fast casual Mexican restaurant where you order food at the counter and can sit either inside or outside. You can also grab a bottled beer to wash down that burrito. The eccentric color scheme on the outside of this building makes it hard to miss.

Butler’s Key West is a cool spot if you’d like to sit down and get waited on. They also have both inside and an outside section with some tiki action with the tables on the sidewalk if you’re looking for some good people watching. Here you’ll find a full bar, happy hour specials and some corn hole to play on the sidewalk. They used to have Bingo every week which was amazing but their neighboring bar whose name we will not mention complained and they had to shut it down unfortunately.

Urban Brew & BBQ is another awesome casual sit down restaurant. They have great food if you’re a carnivore and also a couple of shuffleboard courts out front. It’s a converted mechanic garage and still has the garage doors which add to it’s industrial flair.

Baba – Another converted garage turned Greek Restaurant and bakery. I’ve only been here once but it was a really fun experience.

Lolita’s Wine Market – Great cozy place which would be a great spot to take a date. This wine bar offers premium wine and charcuterie. The owners also run Sophia’s right down the street which is equally as charming. 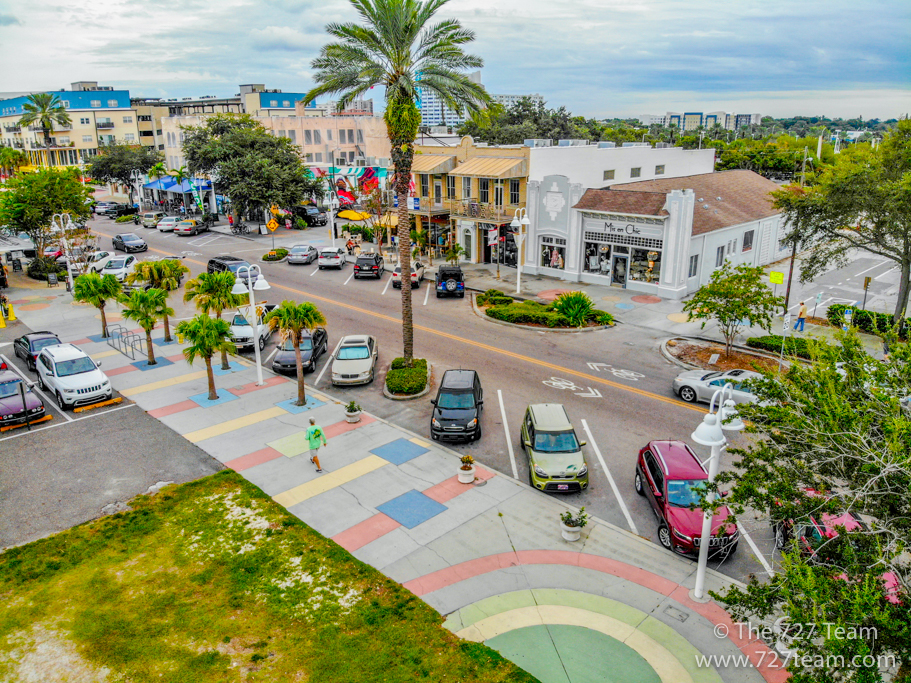 So Grand Central is amazing in it’s own way but you will find 10x more things to do if you venture a mile east towards Downtown St. Pete. If you’re looking for a more happening nightlife then this is where you need to go. I’ve never been a crowded nightlife kind of guy so I typically stick to the places that don’t get nearly as busy which is why Grand Central would be a perfect place for me to live.

If you find that Grand Central is your vibe, you will also like The EDGE District in Downtown. This area is the buffer between The Grand Central District and Downtown along Central Avenue and has a more laid back vibe compared to the more busy portions of Downtown. Within about two blocks you’ll find a ton of restaurants, a brewery, hip bars, an indoor food court and of course the long standing sports bar next to The Tropicana Stadium called Fergs. 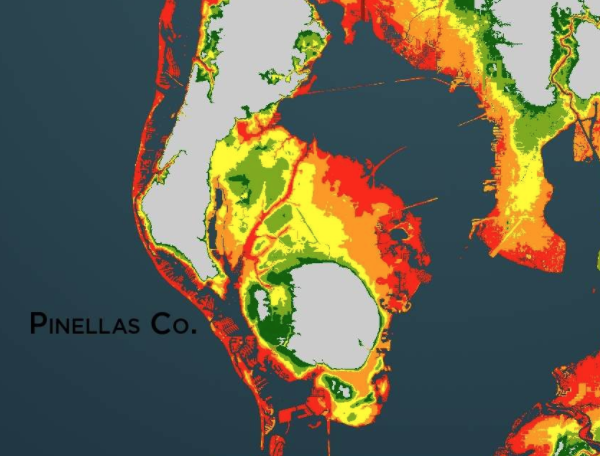 This area is one of the highest elevations in the county. This will matter once a hurricane comes through because even some areas that are not in flood zones are still technically in surge zones. My condo in Pinellas Point for example is in a surge zone but not in a flood zone. Predictive maps show my area being 20 feet under water if we were hit directly with a Category 4 Hurricane. The area surrounding Grand Central is not even in a surge zone which provides some nice peace of mind if you decide to hunker down during a storm.

1. Proximity To The Beach 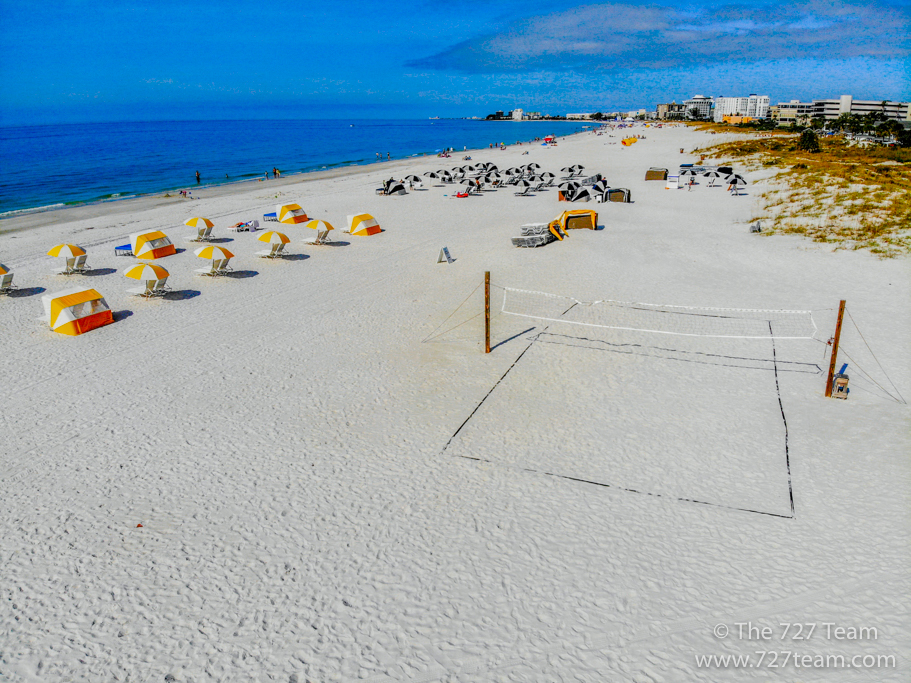 Our beaches are picture perfect and even better is the fact that they never really get that busy outside of tourist season. We have beaches spanning dozens of miles up the western coast of Pinellas County so there’s room to spread out.

Grand Central District isn’t the closest neighborhood to the beach but it is near the main road that is a straight shot there. Jump on 1st Ave N from Grand Central and you’ll be there in 15 minutes.  A 15 minute drive to some of the nicest beaches in the United States is not a bad place to be.

The Grand Central District is in my opinion the best alternative to Downtown when it comes to living in a walkable area. There are other cities and neighborhoods in Pinellas County with the small town mainstreet type charm such as Gulfport, Dunedin and Safety Harbor however all of these cities are their own small cities with nothing else super nearby.

The benefit of The Grand Central District is it has a lot going on for it on it’s own and it’s also just on the outside perimeter of Downtown St. Pete. The surrounding neighborhoods provide the perfect combination of neighborhood charm and the bigger part of the city is just a mile away! If you’re looking for a single family home in a walkable area of St. Pete, this is a great area to consider.

Have questions about The Grand Central District? Feel free to fill out our contact form below or shoot us an email at the727team@gmail.com. Thanks for reading and have a great day!