Top 8 Reasons To Move To The Warehouse Arts District In St. Pete, Florida What I also noticed is that these videos are really well done but don’t get the attention they deserve!  Our website is one of the first sites to pop up when you search for neighborhoods in St. Pete so I figured it would be great for us to feature these videos and give our opinion on these neighborhoods as well.

The neighborhood residents in these videos briefly touch on what makes their area special to them.

With that said here’s the Living Local video from Palmetto Park which has a few nicknames including South Kenwood and The Warehouse Arts District.

8. Up & Coming Area That Will See Appreciation

This is an important factor for anyone looking to buy a home that will eventually appreciate in value. If you look at home values in Historic Kenwood compared to home values in this area, they are drastically different.

Given that parts of this neighborhood are less developed, Historic Kenwood used to be exactly the same way. The people who put Historic Kenwood on the map as a premiere neighborhood in St. Pete did all the leg work. Now the property values are trickling down to surrounding areas and any house that gets renovated is going up in value.

If you were to buy in Historic Kenwood right now, I would be willing to bet that you wouldn’t see much appreciation because it seems as if it’s kind of topped out in value. Some people don’t mind that because they’ll be living there forever and it’s a gorgeous neighborhood.

Those people who may want to buy a starter home and eventually see appreciation would be better off looking here. Here’s an article I wrote a while back outlining other neighborhoods that will see appreciation in St. Pete. New mural in Warehouse Arts District next to Pinellas Trail

If you’re an artist yourself you will definitely enjoy living here and meeting like minded people. One amazing event is the Second Saturday Artwalk that happens on the Second Saturday of every month. About 20-30 art galleries of all sorts open their doors to the public to show off their skills and even do live demonstrations.

This is a free event and there’s a trolley that brings folks to and from all the main art districts. Some notable galleries are the Duncan McClellan Gallery – a world class glass gallery, The Craftsman House which is a restored Craftsman Style bungalow featuring a variety of art and Woodfield Fine Art Gallery which contains some of the most intricate paintings in the city. All of this art is not only really impressive but it’s all locally made here in St. Pete. 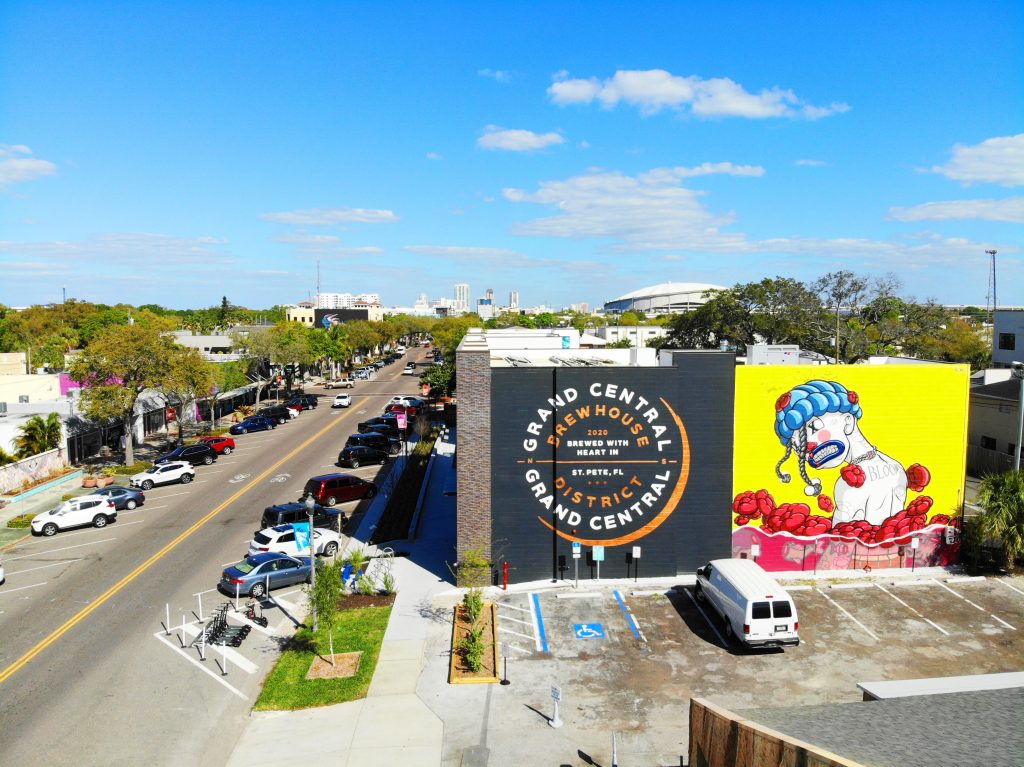 This scene has only taken off since about 2013 when I first moved here. First 3 Daughters Brewing moved in and then a few others followed suit. The available warehouse space in this district has allowed these breweries to open up with expansive space for both brewing and their tasting rooms.

For a while most of the St. Pete nightlife was crowded bars downtown but these expansive spaces with great beer started a whole new culture. Living within walking distance is a blessing when you consume a few of these high octane beers.

Most of these breweries offer plenty of space to bring friends, host events, play bar games like cornhole, darts, giant jenga, chess and ping pong. What’s interesting is that none of these establishments have any pool tables!

If any of you brewery owners at 3 Daughters, Pinellas Ale Works, Cage Brewing or Urban Brew read this a pool table would be a welcome addition. Also since only about 2013, The Grand Central District has really started to take off. Many people consider this as the first alternative to Downtown, St Pete.

You can pretty much park with no issue anytime and there are some delicious restaurants such as Nitallys, Butlers Key West and Urban Brew & BBQ as well as the aforementioned breweries all within walking distance. These bike rental stations are all over St. Pete

Who doesn’t like riding a bike? This district is only about 1 mile from Downtown St. Pete and also right off the Pinellas Trail which will lead you right there.

It’s also great to take a casual ride down Central Avenue and stop at the many bars, restaurants, delis, wine shops etc along the way. I’m not 100% sure on the legality of having a few beers and then jumping on your bike but it is a lot of fun. House we sold bordering The Grand Central District. This home is zoned for both residential and commercial use.

This area is not Historic Kenwood but it shares some common ground with this very desirable neighborhood. First of all it’s about the same proximity to The Grand Central District, just south.

Second it has a bunch of homes that are similar – Bungalows built in the 1920’s that either have been renovated or need a little TLC. There are also newer homes, new construction homes and even a few townhomes along 1st Ave S.

This is your chance to buy in an up and coming neighborhood, put a little money into your home and see it appreciate over time. Think about it – Pinellas County is a peninsula already built up with very limited vacant land. There are a ton of people moving here which means your property value is destined to go up. This is especially true when you consider that home prices here are typically lower than the national average. As you might’ve heard flood zones can be expensive. They typically will double your insurance policy, sometimes more. Also worth considering is that flood insurance is currently subsidized by the government, so if that fund runs out it will be even more expensive.

If you’re a first time home buyer looking to minimize your costs, buy a block construction home in a non-flood zone. This area is also more safe than most of the rest of the county during a hurricane. Even if you’re not in a flood zone, your house could fall victim to a storm surge during a major hurricane. This area is some of the highest elevation in Pinellas. 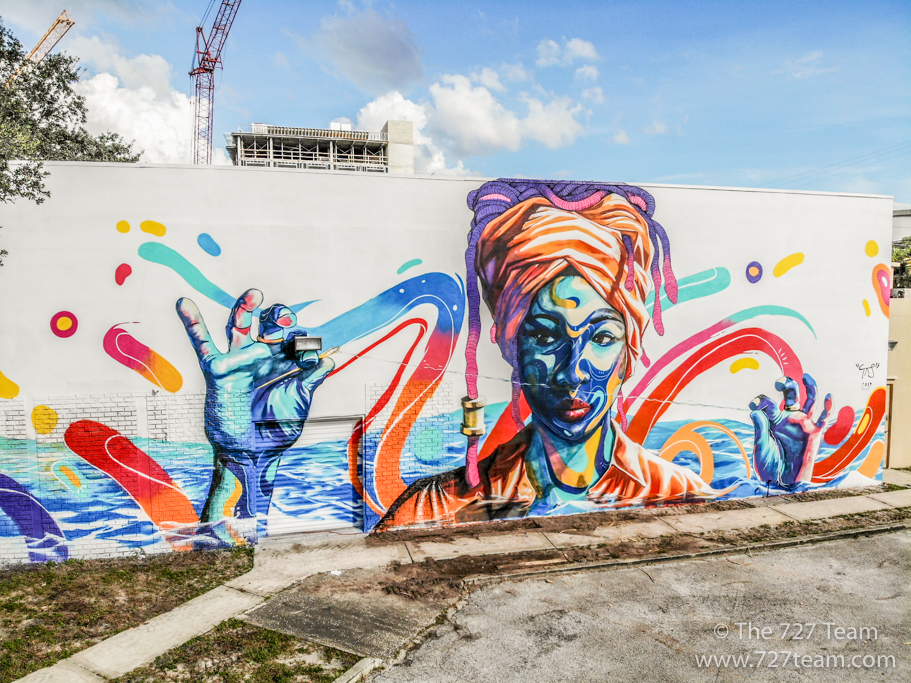 There are a lot of friendly people in this area. No matter what your background, what kind of car you drive, what your house looks like, people seem to be really happy to live here and in return that shows in the way they treat their neighbors.

Owners of local establishments will be happy when you become their regular and treat you like a friend. Neighbors in Historic Kenwood will throw porch parties where they invite the neighborhood over to have a potluck style social. I’m not sure if that trend has caught on in South Kenwood yet but I’m sure it will.

The Warehouse Arts District is an amazing up and coming area. There was a void that needed to be filled – entertainment outside of Downtown St. Pete. This area is artistic, walkable, fun to be in and in a non flood zone. If you’re looking for a walkable area without paying the Downtown prices, this is the neighborhood for you.

Does this sound like something you’re interested in? Feel free to check out all active listings in the Warehouse Arts District here or drop us a note below and we’ll reach out to you to help you find a great home in The Warehouse Arts District. I prefer a call or a text at 727-307-1111. You can also email me at the727team@gmail.com. Thanks for reading and have a great day, thanks!